Developed by Beep Industries and published by Microsoft, Voodoo Vince released in September 2003 for the first-generation Xbox. The quirky puzzle platformer set in the magical underbelly of New Orleans was only playable on the original Xbox - a sad fact that has forced it into obscurity as the years passed.  That being said, retro games have continued to enjoy it via their OG Xboxes.

Resurrected by its creator Clayton Kauzlaric’s independent studio Beep Games, Inc., Voodoo Vince will rise again early next year (2017) in Voodoo Vince: Remastered, a high definition Xbox One rerelease. Plus, for the first time ever, Vince will make the leap to Windows, so even more nostalgic fans and curious newbies can join in on his crazy bayou adventure.

For now you can check out the "teaser" video below: 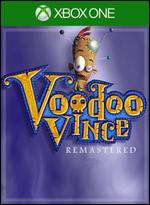