COD is Going to be Santa During the Month of December

Call of Duty is honored to have some of the most loyal fans in gaming, and to show their gratitude they’re handing out a very cool weapon to players who have clocked time in both Call of Duty: Black Ops III and Call of Duty Infinite Warfare.

Starting today and continuing through the end of the month, all players who own Call of Duty: Infinite Warfare and who also play Call of Duty: Black Ops III will receive an epic prototype Hailstorm – Thunder pistol. 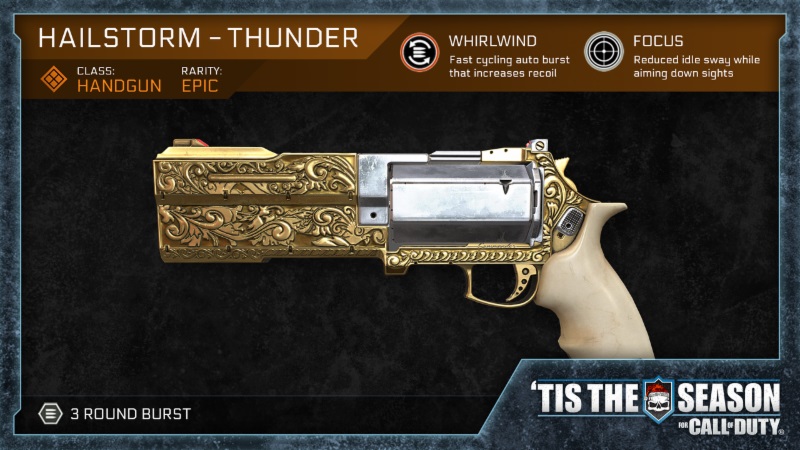 The Hailstorm – Thunder is extremely shiny (and deadly), and features a three-round burst along with two perks: Whirlwind, which is a fast cycling auto burst that increases recoil, and Focus to reduce idle sway while aiming down sights. So, jump in the game today and equip it in your loadout to show some pride.

Plus, we’re throwing in an additional chilly bonus as all Modern Warfare Remastered players will also get the remastered Winter Crash map in all its glory! We’ll be running a 24/7 Winter Crash playlist beginning on December 20 that will last through the holidays.

The holiday map makeover fever is spreading to Call of Duty: Infinite Warfare as well! Later this month, players will find a Genesis Holiday map waiting for them as the Headquarters for the Division of Mechanical Evolution gets a festive new look. Plus there will be a 24/7 Genesis Holiday playlist, ready to spread cheer, goodwill, and KDR ratios.

YOU WANT MORE YOU ASK.  Well...how about a 12 days of winter giveaway/promotion:

Starting on December 21 and running through January 1, the "COD Makers" will be offering some extremely cool gifts every day to Infinite Warfare players who log into the game.

These freebies range from big Salvage and Key bonuses, to winter-themed personalization items, and even exclusive winter-themed Common, Rare, and Legendary prototypes! Twelve Days, twelve awesome gifts for free, just for logging into the game. Just remember to log in every day from December 21 through January 1 to get that day’s bonus. Because each reward will only be available for one day, and once they’re gone, they’re gone.