Rip the ultimate line on real mountains packed with 1500 jumps and rails in Amped, the first snowboarding game focused on freestyle riding. Pull over 1000 tricks on 80 wide-open mountain runs for a different ride every time. Land insane tricks in front of roaming camera crews to get your face on video reels and magazine covers. Get enough media exposure to become one of the world’s top 10 snowboarding superstars. And do it all to the music of over 200 core indie tracks.
Source: http://www.xbox.com/ 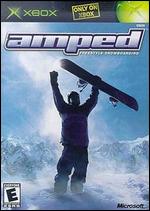