New Trailer for Vampyr has Been Released

Set in 1918 London during a deadly bout of the Spanish Flu that left London’s alleys and promenade’s wailing in agony, Dr. Reid awakes having arrived home from serving in the Great War with a deathly new ailment: vampirism. A Doctor, Reid considers his affliction another disease. As he tries to understand and to live with it, he desperately tries to continue his life as a doctor, helping those stricken with flu.

So, take a look at the trailer below: 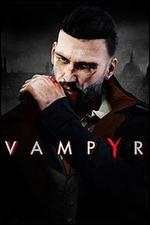