Microïds and Kalypso Media Group have announced that gamers who pre-order the Xbox One retail boxed version of ‘Moto Racer 4’ from GameStop will receive three DLC packs for free as a bonus.

Each one of the three DLC packs (Space Dasher, The Truth, Skewer) includes 1 new rider, 2 new bikes, 2 new horns, and a new emblem. Extreme moto racers who don’t take advantage of this excellent and valuable deal can still access the DLC from the Xbox Marketplace for $3.49 each. 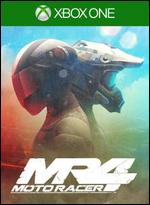