Siegecraft Commander Hits the Xbox One

Siegecraft Commander, the action strategy hybrid from Blowfish Studios where players create a network of fortresses by launching buildings from catapults while attacking to topple enemy bases, is available now on Xbox One.S iegecraft Commander supports cross-platform multiplayer for 2-4 players between Xbox One to PC.

Multiplayer matches can be played as tactical turn-based or action-packed RTS battles. The single player campaign features a real-time war between a band of defense-focused knights and a tribe of offense-oriented Lizardmen.

Want to know more about the game?  Well, here are a few of the game’s highlighted features:

Commanders create a web of interlinked offensive and defensive towers to fortify their home base, cross the battlefield and reduce enemy central posts to rubble. Players are free to design a sprawling network, but their towers must all remain linked to their base. If a structure in a chain is destroyed, everything disconnected from the base in that chain also falls.

We hope to have more on the game as soon as we can for you all. 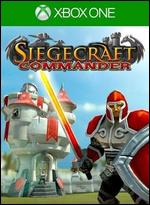