Pixel Story Coming to Xbox One in February

Rising Star Games have announced that the BAFTA-nominated A Pixel Story will release digitally on Xbox One on February 24.

So, I assume some of you may just want to know what this ia all about eh? This puzzle-platformer weaves its tale against a visual backdrop that charts the evolution of video games. Journey from 8-bit pixel art through to current-gen graphical fidelity, playing through a lovingly-crafted celebration of gaming’s history. As gamers progress further into their journey through video games, the world becomes increasingly more detailed and complicated, and evermore perilous.

Discover a charming and challenging adventure filled to the brim with gaming and pop culture references as players become immersed into A Pixel Story’s colourful world. Unlock the awesome power of the snappy Magical Teleportation Hat to solve tricky environmental puzzles, traverse across six large free-form zones, interact with a diverse range of characters, and attempt to stop the evil OS from destroying the universe.

We have requested to review the title and hope to do so in the near future. 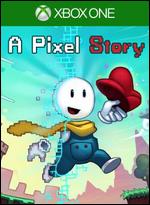