Yager Development was one of the first companies to grace the list of Xbox developers. Its first project, aptly titled Yager, is starting to shape up very nicely.

German development studio Yager Development and publisher THQ have released the first screenshots from the upcoming Xbox game tentatively titled Yager. A mix of 3D action-adventure and air combat, the game will have a complex storyline and numerous campaigns. According to THQ, the player’s decisions during the course of the game will help shape the direction of the game’s story. There will be over 20 characters in the game and it will feature single player, multiplayer deathmatch, and cooperative modes.

The game is currently set for a release on the Xbox in the second quarter of 2002.

Check it out...they’ve got piles of new screenshots too!
Source: http://www.gamespot.com/ 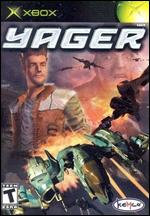 Xbox one no signal
Post by debrartin
0 Replies, 98461 Views