Escapists 2 Coming to Xbox One Sometime in 2017

The Escapists 2, sequel to the original indie game is coming to the Xbox One. The dev-team is bringing fans some amazing new features; at the top of the list is multiplayer, with a wealth of options for playing with friends and strangers alike. There’s also a cool new art style, a revamped combat system, new gadgets to craft, and most importantly: a host of daring new ways to break out!

The biggest additions found in The Escapists 2 are the multiplayer modes. There are two modes, Co-op and Versus. The approach taken to implementing co-op multiplayer is “drop in/drop out”. It’s a great fit for the game and means that other escapees can join your attempt to spring free at any time. Having other players join your prison is as simple as switching your game to “Online” — if you’re finding a solo escape attempt a little tricky, you can call on friends (or strangers) to join in and give you a helping hand. The Versus mode is a little different. This competitive mode pits you against opponents, and every inmate works for themselves, with the winner being the first player to bust loose.

The developers have also focused a lot of effort on improving the original gameplay to deliver a fairer and more approachable experience. In The Escapists 2 you should always understand the reason why you were caught. For example, whenever naughty actions are discovered by guards the prison is put on higher levels of alert, until it reaches the punishing “Lock Down” status. Getting caught committing crimes during a lock down will mean a short stay in solitary confinement; a stay you can reduce with a bit of repentant potato peeling.

We indeed hope to have more coverage as a launch window is announced. 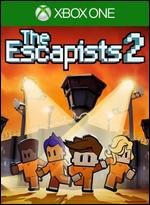