Starbreeze AB has released an all-new cinematic trailer for its upcoming action co-op shooter RAID: World War II. Developed by Lion Game Lion, the game lets teams of up to four players go undercover behind enemy lines to destroy the Nazi war machine from within. Join Allied soldiers from different parts of the war to systematically take down the regime and seek redemption, one mission at a time. 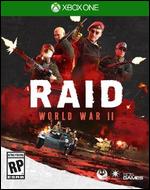