Publisher SOEDESCO has announced a new original IP: AereA, an action RPG. The first game in the AereA-series is in development under the SOEDESCO brand and will be released later this year.


Adam’s Venture: Origins was the first IP released under the SOEDESCO brand. With AereA, the publisher adds an exciting new brand to its portfolio. The first title in the AereA-series is a music-themed action RPG in which the player goes on a quest to unravel the mysteries of the broken world of Aezir. 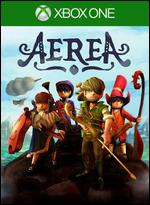