So, Rockfish games have been busy updating their title Everspace, with a bit of everything to make fans of their game happy.  You can take a look below for ALL the details: 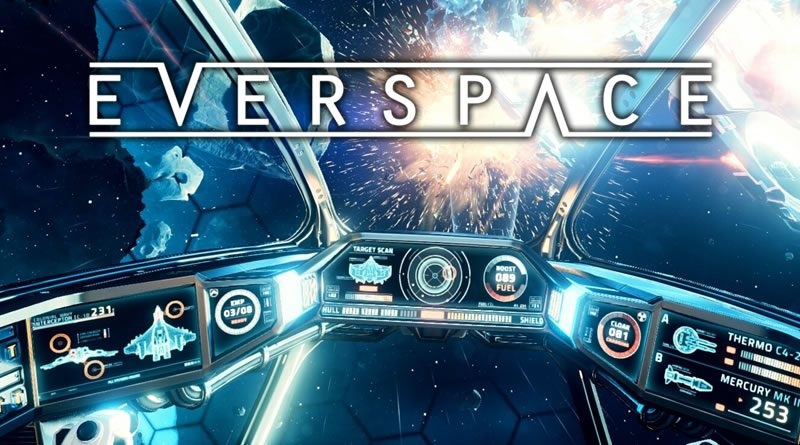 Go to the hangar and have a look at the beastly Colonial Gunship. You can immediately tell it’s a flying fortress with a massive hull and lots of firepower. It comes equipped with a fusion blaster and flak cannon as primary weapons, heavy missiles, cluster mines, scanning probes, combat drones, and an automated Gatling turret which can be upgraded.

And it’s getting even better. With Update v0.4 you’ll benefit from a host of new additions and improvements, including the updated Front Shield Generator for the Gunship, with its improved armor and impressive energy core recharge rate along with an additional device slot.

Before jumping into the Gunship’s pilot seat, take a closer look at your Perks. You’ll see that we split them into pilot and ship-related and tweaked the latter quite a bit. This increases the differences between ships and the replay value, while still retaining the overall long-term progression of your pilot-related perks. To differentiate the playstyle of the three player ships even further, the Rockfish Games have also introduced ship-exclusive Perks like Armor for the Gunship and Sensor Range for the Scout.

The dev-team have also added two new pilot Perks: Trading and Diplomacy. While Trading grants benefits at shops and service stations, Diplomacy increases your standing with G&B. Their units will occasionally report your attacks, turning them hostilenot only in the current but also the next location. With Diplomacy, you can make them a little more forgiving every now and then; they might even jump in to your rescue when you’re outnumbered by outlaws – always good to have friends around you!

In Everspace v0.4 you’ll come across the remains of Colonial stations which can be explored to discover permanent ship enhancements. You can equip these uncovered sub-routines to your ship before each run. Some will buff various ship attributes. Others will change the playstyle significantly by, for example, making all enemies visible on the radar, but with the downside of letting your persecutors track you down more quickly due to the stronger radar signature of the enhancement.

Getting hold of these enhancements will be no easy task: the sometimes-humongous station wrecks are equipped with massive security measures like turrets, laser barriers, combat drones, and security doors. Another threat are the plasma discharges that put you in danger of being pushed away and colliding forcefully with other objects.

As visualized during their Kickstarter, you can now change the colors of your ship. In addition to the standard color palette available at the start of the game, you can collect even more colors just like blueprints by shooting down powerful enemies.

By combining the ship’s main color with two different decal colors, you can get creative, giving your ship a unique personality and individual look in the hangar. In the hangar interface, you will also be able to assign special permanent loadouts which will be unlocked for each ship after reaching certain sectors. Loadouts provide completely different ways to play, allowing you to test out different playstyles, particularly at the beginning of a run.

More to Fight and Explore

But the additions don’t end there. Look forward to new natural hazards, a new planet type, more structures, additional points of interest, a new dreadful type of enemy and, finally, the first chunk of log book entries written by some of you who backed us.

So there you have it folks, you’ve got the latest news on all the details on the latest update.