Lethal League Set to Release on May 10th

Dutch game developer Team Reptile has announced that their competitive projectile fighting game Lethal League will release on e on May 10th of this year.

Lethal League is a competitive projectile fighting game where you have to hit an anti-gravity ball into the face of your opponent to win. The ball speeds up with every strike, up to explosively extreme velocities. Think dodgeball with baseball bats. Play intense local matches with friends and foes, challenge yourself in the single-player mode or battle it out online.

Te game features the following (as noted from the developer):

It should be also noted that the game was rebuilt from scratch as it was previously released on Steam. During this process they had a chance to improve the online functionality and translate the game into 8 different languages. Oh, and did we mention that a two-man team did this?

We hope to have more on this game as the release date approaches. 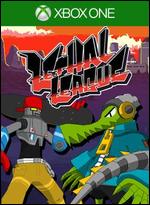