The murder mystery game Thimbleweed Park has finally hit the Xbox One for gamers to experience.  What is this game you ask?

The Thimbleweed Park Sheriff has formally closed the ongoing investigation into the dead body under the bridge citing lack of evidence, dwindling interest, and a desire to get home by 8:00pm to watch wrestling.

The murder victim is believed to be a European visitor with no ties to the local community. The unsolved murder is the latest in a series of suspicious events that include the sudden death of town founder Chuck Edmund and the mysterious disappearance of his brother, Franklin.

In the course of the investigation, the Thimbleweed Park Sheriff’s Department raised suspicions about two uninvited federal agents, disgraced entertainer Ransome the Clown, and pillow factory heiress Delores Edmund. Though their involvement has not been definitively ruled out, the Sheriff today insisted he sees no reason to waste further resources on a "dead-end-a-reno case."

"Dead body? What dead body?" the Sheriff blurted when pressed for comment, conspicuously looking over his shoulder.

Backed by over 18,000 people, this game was made becuase of those who believed it. 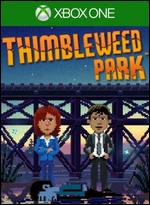