NBA Playgrounds is a new, high-flying, arcade-style basketball game. This classic 2-on-2 action experience will be available on Xbox One as a digital-only release in May 2017 for $19.99.

All 30 NBA teams are featured in NBA Playgrounds, as well an extensive roster of current and retired NBA players that you can level up over time.  Play solo, with friends in local and online multiplayer, or against the world in online tournaments. There are hundreds of over-the-top dunks and moves to unleash for show-stopping displays of acrobatic skill on lively playgrounds across the globe. 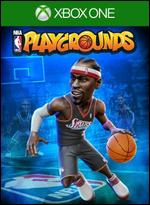