Featuring teeth-rattling online play and matchmaking, Mayan Death Robots: Arena is coming to Xbox One on May 19 priced at $6.99.

You may be thilnking: "what the hell is this game all about?".  Well,  Mayan Death Robots reinvents the artillery genre in a Mayan setting invaded by alien killing machines. Pick a robot from the roster and enter the arena to destroy your opponent’s power core. Aim your weapon before the timer runs out, but don’t be distracted by the pretty scenery: when the rockets start flying, you already need to plan your next move.

Still curious, you can check out the trailer below: 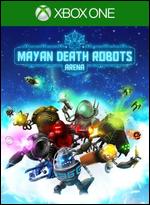