Portal Knights, the cooperative action-RPG developed by Keen Games and published by 505 Games, has launched today in North America on Xbox One after refining the gameplay experience in Steam’s Early Access program over the last year.   The dev-team added new content for players, ranging from larger islands to additional timed events, on a near-monthly basis for more than a year. 505 Games and Keen Games remain committed to listening to community feedback after the game releases and plan to add more content and new features on a regular basis.

In Portal Knights, players will begin their journey as a Warrior, Mage or Ranger, then level-up their character and craft powerful gear and resources to defeat formidable monsters and epic bosses in real-time combat. Featuring four-person cooperative online multiplayer and two-player local split-screen action, Portal Knights allows players to work with friends or family to build structures, explore dungeons and overcome challenging perils together. Knights can travel between randomly generated 3D sandbox worlds on daring journeys, build a home to show off hard-earned treasures from explorations, and master tactical action combat and powerful talents on their quest to restore peace to the world. 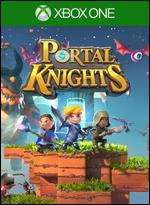