Looks like publisher Paradox and Obsidian Entertainment want to bring more RPG love to the Xbox One this August.

What is this game you ask? Well, the developer believes it is the ultimate role-playing experience on PC and they are bringing it to the Xbox One! Created by and for role-playing fans by Obsidian Entertainment, masters of the RPG genre, Pillars started as a Kickstarter project, where it shattered all funding goals and pulled in more than 75,000 backers. From there, it released to critical acclaim, won dozens of awards, and has been a fan favorite on the PC. Now, Paradox Arctic has adapted this unmissable RPG for an entirely new audience on major consoles -- bringing Pillars’ fantastical world, tactical combat, and unforgettable story to fans on a whole new platform.

Pillars of Eternity: Complete Edition includes all previously released additional content from the PC version, including all DLC and expansions in a single package.   But Pillars of Eternity: Complete Edition goes beyond just offering everything together. Paradox Arctic has thoroughly updated the Xbox One version of the award-winning RPG for play with a controller, and have entirely redesigned the UI for easy viewing on televisions. Players will be able to easily navigate the game’s detailed character creation, real-time-with-pause combat, and party management from their couches thanks to new TV-friendly menus and controls.

Pillars of Eternity: Complete Edition will include a broad selection of character options, award-winning story and writing, and a rich, original world realized in gorgeous artwork and animation. You’ll also get the most complete version of the game to date, including the two expansions released: The White March: Parts I & II. All of this, plus new enhanced console controls and UI, making the detailed party management and tactical combat a cinch on your controller. 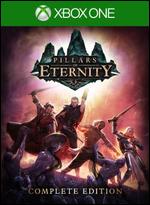