GET EVEN from Bandai Namco Now Available

Bandai Namco has officially launched of the first-person shooter and psychological thriller, GET EVEN to the masses, including on the Xbox One

In GET EVEN, you assume the role of Cole Black, an ice-cold mercenary and hired gun, as he suddenly awakens in the middle of a mysterious asylum with almost no recollection of his past, save for a haunting memory of a young girl in mortal danger. Under the guidance of his anonymous captor, ‘Red’, Black embarks on a form of treatment, facilitated by a unique technology - a headset that enables the user to relive his memories and experience them again in the present. With the help of the “Pandora” headset, Cole must traverse the abandoned asylum to confront unexpected plot twists and uncover the truth of his past to travel through the depths of his mind for salvation.

We hope to have more on this title ASAP. For now check out the launch trailer below: 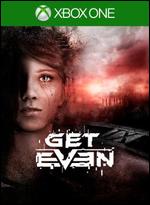