DeadCore is a first-person platformer blending exploration, speedrunning and puzzles, originally developed by the French studio 5 Bits Games, and launched to critical acclaim on PC in 2014.The dev-team is delighted to bring this exciting iteration of DeadCore to Xbox One fans!

The dev-team has been hard at work making sure that console players will experience the same original gameplay action as the much-loved PC version. The only changes they made were mostly on the controls, to provide a smoother experience when using the gamepad. They also added an aim assistant, but you can disable it if you want to challenge yourself even more.

DeadCore is set in a futuristic world featuring the Tower in its center and an insane level design that will put your skills to the test. Every level has two main paths to complete and several other secret passages or shortcuts to uncover.

Apart from the solo campaign story mode, the game features a special speedrun mode with dedicated maps that you can unlock by finding Sparks hidden in the main levels. There are also power-ups that grant new abilities, such as the dash, blast or gravity transformation, and will help you to progress through the game. You will also find many types of hidden collectibles that unlock new content such as new maps, new music tracks, and more. 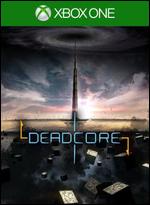