The year is 2084. If you somehow survived the Nanophage, odds are you were killed in the War. Those who live have turned to drugs, VR, neural implants— anything to distract themselves from this new reality. You are Daniel Lazarski, an elite neural detective known as an Observer, and part of a corporate-funded police unit whose purpose is to hack and invade suspects’ minds. In this future, anything you think, feel, or remember can be used against you in a court of law. 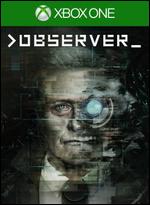