Namco has released several new screenshots from and information on Soul Calibur 2. As reported in the Japanese publication GameWatch, the game takes place in the latter half of the 16th century, as the major countries of the world are beginning to intermingle and grow together. It has been four years since an evil presence arose, and rumors of the powerful Soul Edge are spreading throughout the land. There was word that the Soul Edge had been used to move the heavens and slaughter innocents in Europe. Still, although the world lives in peace now, Nightmare has returned, along with the Soul Edge. As the game begins, a band of fighters from the East and West must once again assume control of the Soul Edge for their own unique motives. 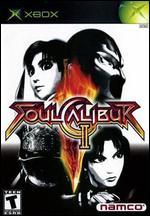 Xbox one no signal
Post by debrartin
0 Replies, 97701 Views