Techland Publishing has announced that their original farm simulator, Pure Farming 2018, will be released on\ Xbox One on March 13th 2018.

Xbox One fans who love their virtual farming can now pre-order the game for Xbox One starting on August 17th. All players who pre-order the game will receive the brand-new map, set in Bavaria, Germany for free, featuring exclusive activities: growing rapeseed and raising sheep.

Everyone who wants to get all the various pre-order bonuses of fancy licensed farm machinery from different retailers in one package, Techland Publishing has announced the content-packed Pure Farming 2018: Digital Deluxe Edition,which includes three exclusive machines licensed by Lindner, Gomselmash, and Landini, the Germany Map, and the special outfit pack containing four branded outfits for the in-game character.

For now we leve you wih the trailer below: 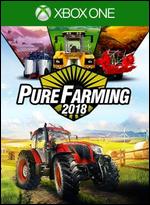