Set in a dark, sci-fi universe, Immortal: Unchained is said to be a unique take on a well-known sub-genre (Action RPG), blending third-person action shooter and hardcore RPG elements. Immortal: Unchained is the first original franchise from publisher Sold Out and developer Toadman Interactive and it is slated to release in Q2 of 2018.

Immortal: Unchained plans to feature a diverse arsenal of unique weaponry for ranged and melee combat, which will aid players in exploring the world, and in facing brutal enemies and merciless boss fights. Immortal’s ranged combat mechanics allow for tactical point-of-contact shooting, and create strategic alternatives in instances when slowing down or disarming an enemy may be more beneficial than simply blasting them away.

Featuring writers from Battlefield 1 and The Witcher comes a story the player will have to piece together themselves, as the central character sets off with no memory of their past. Unwillingly unchained by the warden, the player’s skills are put to the test, given only the instruction that they must stop the end of the world. Other characters in the game may shed light on the situation, but the reality is not always clear, as characters are always operating on their own agendas.

We hope to have more information as news of this game continues to come out. 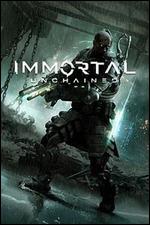