MAIZE Now Available for Xbox One

Looking for a "corn fueled" first person shooter on Microsoft’s console? Well look no further fans as MAIZE has been officially released on the Xbox One today.

It a game that the dev-team states that perfectly suited for the couch....that is couch play gamers.  As an added incentive, if you purchase MAIZE in the next two weeks, you’ll get 25% off the purchase of the game.  We here at XBA really like deals, so this seems to be a pretty good price for a new game.

CHeck out the trailer below: 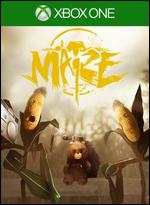