704Games has released NASCAR Heat 2 on the Xbox One (and Windows PC). It is available today for $49.99 at major retailers, as well as digitally via the the Xbox Games Store (and on Steam for PC).

Retail editions of NASCAR Heat 2 also include a voucher for $50 off the purchase of any ticket (certain restrictions apply) for any remaining 2017 and all 2018 NASCAR-sanctioned events at one of eight Speedway Motorsports, Inc. ocations across the U.S. (while supplies last too) 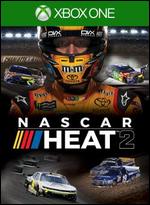