The game is said to bring together agile movement with awesome superpowers and a whole host of wise cracks, Deadbeat Heroes charges players with dodging bullets by leaping, dashing, wall-running, climbing and backflipping their way to victory.

The UK-based studio was founded by former Lionhead & Rockstar developers Adam Langridge and Imkan Hayati, with the two men having earned their stripes working on big name triple-A franchises before setting out to make a mark on their own.

Deadbeat Heroes will launch with 40 levels, each one populated by an array of different enemies who can be tamed with movement based attacks and 9 over-the-top superpowers. With the ability to block attacks intentionally removed the result is a style of combat that encourages swift reactions and a focus on versatility.

You can check out the newest trailer below: 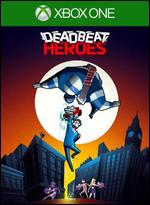