Action Adventure Game 'SHINY' Coming to the Xbox One

Action adventure game  SHINY from Brazilian developers Garage227 is launching on Xbox One worldwide on October 11th for $9.99. Fans of the genre who may be interested in it will be interested to know that it is available for pre-order with a 20% discount. SHINY will be the first Brazilian game made with Unreal Engine to launch on Xbox, and will have you jumping, flying and sliding your way to escape from a dying planet.

SHINY is about saving lives and has zero violence or blood, but features some intense platforming, robot saving and killer powerups. Energy is limited, so you will have to collect batteries or use generators to recharge, as every action drains your power.

Left to fend for himself after mankind abandoned the doomed planet Aurora, Kramer 227 must find a way to harvest energy and rescue his robotic friends before Aurora crashes into its sun. In his journey through 20 action-packed levels that will test platformer skills and reflexes, Kramer will probe the planet and overcome challenging obstacles, all while trying to conserve his limited life energy to power himself and his friends on their way to safety. Various power-ups collected along the way, including jetpacks, energy spheres and temperature regulators, can help on this crucial journey.

You can check out the announcement trailer below to see the game in action: 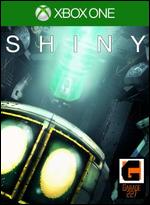