A new game was announced this past week.  What was it you ask? Well, it was Slayaway Camp: Butcher’s Cut, and it is coming to Microsoft’s console.  It is said to be the "meatiest version of the most violentest puzzle game every made", and it will be released in time for Halloween.

Slayaway Camp is the debut game from Blue Wizard Digital, the indie studio formed by PopCap co-founder Jason Kapalka. Between them, the Blue Wizard team has previously worked on such awesome titles as Bejeweled, Peggle, Cosmochoria, and Cardinal Quest.
It also features the incredible voice-over talents of Mark Meer, better known to gamers as Mass Effect’s Commander Shepard, and Derek Mears, who plays legendary killer Jason Voorhees in the 2009 reboot of Friday the 13th.

Slayaway Camp is a killer puzzle game where you control Skullface, a psychotic slasher hell-bent on revenge. Slide this adorably demented murderer around hundreds of isometric puzzle levels to squash, flay, and decapitate hapless victims in this darkly comic homage to 80s horror movies.

You can definitely get a feeling of what this game has to offer in the video below: 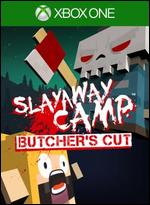