Rogue Trooper Redux Has Hit the Xbox One

Rogue Troopoer Redux sees the return of 2000 AD hero Rogue, the last of the Genetic Infantrymen. Bred only for war and betrayed by his superiors, Rogue seeks nothing but revenge in this pioneering tactical shooter and landmark comic book adaptation.

The game was originally released in 2006 and earning two BAFTA nominations for Best Character and Best Story and it is said to be a true cult classic. With its timeless blend of stealth-action gameplay, cover-based combat and epic set pieces, it’s remained a fan favourite a decade on.

Rogue Trooper Redux enhances the original with HD graphics, remodelled assets, new special effects and dynamic lighting, modern controls, extra difficulty settings, a revamped cover system and more. You can get a sneak peek in the launch trailer below: 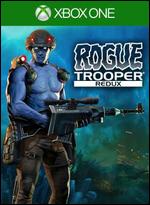 Xbox one no signal
Post by debrartin
0 Replies, 85117 Views