Hello Neighbor is a stealth horror game about sneaking into your creepy neighbor’s house to figure out what he’s hiding in the basement. You play against the Neighbor’s advanced AI that counters the player’s every move. The game took the internet by storm with its Pixar-like esthetics and an unconventional approach to Early Access and is now coming to the Xbox One.

So, with that being said, check out the Halloween trailer below: 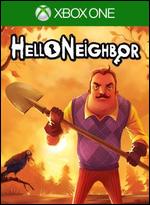