2K has announced that the WWE 2K18 Kurt Angle and Cena (Nuff) Packs are Now Available as downloadable content on PlayStation 4, Xbox One, and PC.

While neither of these newly available packs are included in the WWE 2K18 Season Pass, they are special items for pre-order customers (Kurt Angle Pack) or Deluxe and Cena (Nuff) customers (Cena (Nuff) Pack). 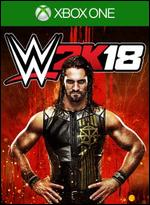