SOMA Coming to the Xbox One

From the makers of ’Amnesia’, comes a game about consciousness, and that game is called SOMA.

The aim for the game is to allow the player to experience the mysteries of the mind firsthand. For the dev-team at Frictional Games, this gamplay experience was quite fuzzy, and it was often unclear what they should focus on. As a foundation they had a collection of research results and thought experiments, but these wouldn’t create a game on their own. They had to figure out ways of interacting with them, and to wrap it all into a coherent narrative.

The dev-team ended up focusing on questions of identity and moral worth. The player will come across situations where they have to make difficult choices, forcing them to consider uncomfortable questions about the nature of self. Then, as the game progresses, the player is put in similar situations themselves, letting them experiencing these things first-hand. By having the previous choices as build-up, the dev-team was able to get a lot more impact in the first-person experiences, achieving their desired effect.

While SOMA has its share of creepiness, it is not a pure horror game. At its heart it is a narrative-heavy sci-fi experience. The monster encounters are there to make the world feel more alive, to reflect particular concepts, and to up the stakes. Unfortunately this has meant that there are some people who – because they don’t like being terrorized by deadly creatures – have been unable to experience the story.

With this in mind, the dev-team has decided to present the console exclusive Safe Mode, a version of the game where there are no hostile encounters and where you can simply focus on the unfolding narrative. It is their hope that this feature will let even more people dive into the mysteries of consciousness and question what it means to be human. 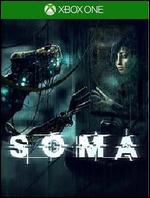