Raiders of the Broken Planet Getting DLC on November 30

Wardog Fury, the second premium campaign for Raiders of the Broken Planet, will be launching on November 30th. Just like the first campaign, Alien Myths, Wardog Fury will be available to purchase as a stand-alone campaign for just $9.99.

In Wardog Fury, Harec attempts to recruit Loaht, the genetic experiment that the leader of the Umbra Dogs, General Marmalade, created. Loaht has the ability to transform into a furious beast, powerful enough to rip apart the strongest of foes. With Loaht on his side, Harec can turn the tide of war in the Raiders’ favour. However, General Marmalade has plans to take all the Aleph on the Broken Planet for himself and to eliminate his rogue experiment in the process. With Loaht on the run, who will get to him first? Find out in the second chapter of the epic Raiders of the Broken Planet saga.

Launching on November 30th, Wardog Fury will include four new epic story missions, all playable in single-player, 4 player co-op or the intense 4 v 1 Antagonist mode. In this story, the Raiders will face the deranged General Marmalade and his Umbra Wardogs faction. Alicia knows first-hand just what this man is capable of and the rest of the Raiders are about to find out too. General Marmalade conducts narcotic and Aleph experiments on himself and his units, creating mutants that are as grotesque as they are deadly. Wardog Fury players will exclusively be able to recruit one of Marmalade’s rogue experiments, Loaht, in the first mission.

Also joining the fray during the Wardog Fury campaign are three more characters, who will be able to be unlocked by all Raiders of the Broken Planetplayers:

You can check out the announcement trailer for the game, with a little bit of actual gameplay, right below: 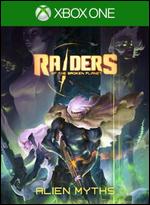