A Hat in Time Coming to Xbox One in Early December

A Hat in Time,, a platform game developed by Gears for Breakfast is set for launch on the Xbox One family of consoles worldwide on December 6.

It has been said, espeically in the press release, that A Hat in Time is considered GOTY by a growing number of global outlets and has received close to 3000 reviews on Steam for an "overwhelmingly positive" rating since its PC launch in October.

If you’ve played Yooka-Laylee, the Crash Bandicoot N. Sane Trilogy, Super Lucky’s Tale, or Sonic Mania, and you are still hungry a true GameCube era love-letter to 3D platformers, you’re in for a heck of a good time as A Hat in Time just might be your game.

A Hat in Time follows the charming adventures of Hat Kid, a tiny space-traveling girl who travels the universe to protect the world from the evil Mustache Girl. The game is, as the press release states, said to be super-fun.  We hope the give the game a spin and review it for you. 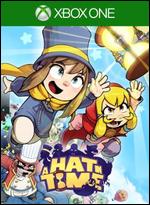