The Adventure Pals Announced for Consoles

Armor Games Studios has announced it will launch developer Massive Monster’s co-op platformer The Adventure Pals in spring 2018 on consoles including the Xbox One.

What is The Adventure Pals you ask? Well, it is a side-scrolling action-adventure platformer about friendship and exploration, featuring RPG elements and two-player local drop-in/drop-out co-op. Leap, slash and blast your way through increasingly madcap levels filled with dangerous traps, weird enemies, ridiculous bosses and glorious treasure. Visit friendly towns, unlock fun costumes and fill your scrapbook with secret stickers on a journey with a bizarre but lovable cast and colorfully animated storytelling.

Hop on the back of your giraffe, Sparkles, and discover 105 levels across five whimsical worlds filled with unique quests and characters, including zombie pirate cats, post-apocalyptic dinosaurs and hot dogs that poop explosive mines. Help a whale regain confidence, take a side in the battle between toast and dinosaur, travel to a legendary sunken city, decide the fate of a pirate election and more, all while leveling up to gain new and more powerful abilities.

You can check out a video below showing off what this game is about: 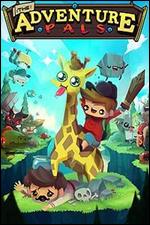