Square Enix's 'Oh My Godheads' is Out Now

Square Enix Collective’s couch-based multiplayer Oh My Godheads is available now. Developed by Barcelona-based studio Titutitech, Oh My Godheads’ gameplay is built around an intentionally frenzied ‘capture-the-head’ mechanic that triggers as many laughs in defeat as it does celebration in victory.

It’s a slice of multiplayer madness where friends compete to carry godheads back to their base, closely mirroring traditional capture-the-flag style gameplay but adding a whole heap of extra delirium thrown in for good measure. The game launches today after enjoying a more than six month long run in Early Access.

Not enough detail for you? Well, here are the features that of the game to educate you even more:

We won’t lie, we are going to review this, but we are swamped, and we aren’t the biggest site around. 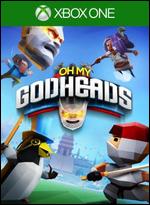