Rad Rogers Coming to Xbox One

Looking for a new platform game that is a bit different from all the others? Well, THQ Nordic might have the solution for you.  The Kickstarter financed game Rad Rodgers brings back the 90’s-era PC platformer with a game inspired by classics like Commander Keen, Conker, Ruff’n’Tumble & Jazz Jackrabbit.

Rad is a rambunctious but spirited young boy who maybe plays too many video games. After dozing off at the tail end of a long night of gaming, Rad awakens to find his dusty old console has turned itself back on. Suddenly a vortex emerges and he’s sucked into his TV, where he finds himself the star in his very own video game adventure.

Developer Slipgate Studios and Publisher THQ Nordic will release Rad Rodgers on February 21st, and on all of the Xbox One famiy of consoles. Here’s what you can expect:

You can definitely call us interested on this title, as it looks quite interesting. We hope to have more as the eventual release date comes closer. 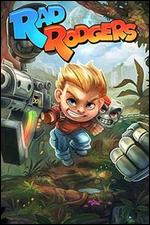