For those RPG fans out there, new details were released for the upcoming RPG Kingdom Come: Deliverance, via a new video. The game is slated for release on February 13 of this year.

The video gives an extensive look at the key features of the game, including the historically-inspired combat system. To survive fights in a country which is torn apart internally and invaded by foreign forces, evening the odds is key when rushing into a battle. Kingdom Come: Deliverance offers plenty of more prudent approaches for keen eyed players who invest time explore the world.

You can check out the detailed video below: 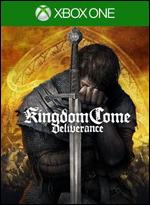