Pinstripe Coming to the Xbox One Soon

The action-adventure game Pinstripe is set to relased on February 7th for Xbox One. The game is said to be playable in seven different languages; English, French, Spanish, German, Portuguese-Brazil, Russian, and Simplified Chinese.

What is this strange game called Pinstripe you ask? Well, it is created by Atmos Games, the label of independent developer Thomas Brush, best-known for the games Coma and Skinny. The game follows an ex-minister’s emotional journey through Hell in search of his kidnapped daughter. As players descend further into the chilling reaches of the underworld alongside their trusty canine companion, they’ll encounter strange creatures, thoughtful puzzles, and the mysterious Mr. Pinstripe, a shadowy nemesis who may hold the secrets of the past.

The game is said to be inspired by classics like The Nightmare Before Christmas, Coraline and Alice in Wonderland, Pinstripe’s bold artwork strikes a tone between darkly somber and eerily comical, with colorful designs that bring Hell’s otherworldly environments and inhabitants to life, and an evocative orchestral score, composed by Brush. The game originally released for PC, Mac, and Linux in 2017, with positive reviews from critics at Time, Waypoint, the Washington Post, EGMnow, and others.

You can check out a trailer for the game right below, in order to get an idea of what to expect: 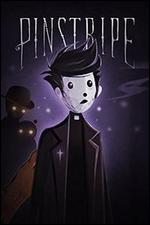