If you’ve ever heard, or seen, the game Goat Simulator, then you know that it’s not a normal game by any means, and that it was developed by a team that had a lot of creativity in their mind. Well, that company that thought it was a good idea to publish that game is at it again, as Coffee Stain Pubishing and Ghost Ship Games are about to release a new game on the Xbox Preview program, and that game is Deep Rock Galactic.

What is this game you ask? Good question. Players take up arms as one of four classes of badass dwarven miners, each with their own invaluable set of skills and gear. The Driller, the Engineer, the Scout and the Gunner must work together to survive a relentless onslaught of ravenous aliens and escape the procedurally generated caves with their bounty intact.

The game is slated to hit the Xbox Game Preview on February 28th. Until then, check out the trailer below for a hint at what is to come: 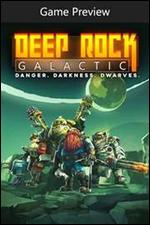