Fox n Forests to Hit Xbox One in Spring 2018

A newly developed 2D action platformer, Fox n Forests, is coming to the Xbox One this spring.

The game has players assume the role of Rick the Fox. Armed with a magical crossbow, granting the powerful ability to change between two seasons in a level, Rick can freeze his surroundings in winter, create new platforms out of falling leaves in autumn, and use a host of other powers. Only by mastering the seasons will Rick be able to outfox his enemies, explore the mystic forest, solve brain-teasing puzzles, claim victory against colossal bosses, and bring the mystery of the fifth season to light.

Fox n Forests is said to be inspired by classic games including Super Ghouls ‘n’ Ghosts, Wonder Boy in Monster World, ActRaiser 2, and the Castlevania and Zelda series, It is also a game that is said to be both accessible and challenging. The game combines retro charm with modern game design while offering glorious 16-Bit graphics and a chiptune soundtrack.

Finally, a bit more about the game for you.  It was successfully funded via Kickstarter in 2016. Fox n Forests will be the first title from EuroVideo’s new games label Wild River and will make its North American debut at PAX East 2018.

If this game remotely interests you, and even if it doesn’t, check out the announcement trailer below: 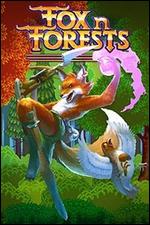