Square Enix Collective is at it again, as they have revealed yet another game.  That game is Octahedron - the 2D vertical action platformer by indie studio Demimonde - which will bring its kaleidoscope of colour to the Xbox One on March 20th.

Having joined Square Enix Collective back in September, Octahedron’s psychedelic adventure garnered praise aplenty after appearing at the UK’s biggest video games expo - EGX in Birmingham’s NEC Arena - that same month, with its rhythm-synced action housed within handcrafted levels proving rather addictive for those eagerly waiting in line.

So, what is Octahedron you ask? Good question, as we wondered too. Square Enix Collective states that Octahedron’s electric 2D world charges players with creating their own platforms in quick time to progress, escaping from the strange subterranean world of Veetragoul and fighting back against peculiar enemies out to take you down in the process. It’s a highly charged encounter, running at a smooth 60fps and brilliantly synced with a soundtrack created by popular video game composer Chipzel and trance producers Andre Sobota and Derek Howell, amongst others.

Is this description enough for you? Well, if it is good, and if it is not, then sorry, but regardless if it is or isn’t, check out the video below to get a better sense of what the game will offer: 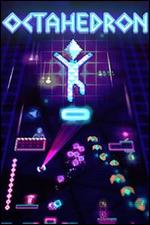