'The Story Goes On' Now Available for Xbox One

‘The Story Goes On’ is now available to Xbox One. Players will discover what it means to become a hero in a game that claims to offer a fresh take on the hack ‘n’ slash genre, combining elements of permadeath, random world generation, puzzles and a rich overarching story.

Those who take on t his adventure will find themselves in the unfinished storybook of a crazed author, on the brink of being discarded forever. The Story Goes On is a tale set in an endless maze known as ‘The Odyssey’ where each player can experience their own unique journey. The Story Goes On allows players to progress at their own pace as almost every event, puzzle and fight can be completed as fast or slow as you’d like.

An adaptive soundtrack reacts in real-time to the environment and gives players a truly personal playthrough, and every item is designed to add to your experience and shift the way you play. From combat enhancements to new ways of traversing puzzles, items in The Story goes On are laid out to work with each other and grant the player epic combinations every time they play.

The randomly generated worlds, dungeons and combat in The Story Goes On means no playthrough is the same, whilst the sprawling story remains constant, each player will discover it in their own way.

Xbox One players can exclusively enjoy The Story Goes On in the new co-op mode. Players can traverse The Odyssey with an equally powerful partner in a truly high-stakes adventure. Both players begin with their own standard health pool with three hearts and when depleted, they die. The living player can then split his health in half and share it with his previously dead partner. Is one healthy player more likely to finish the run, or are two almost dead players your best shot? Reviving in The Story Goes On co-op mode is a perilous gamble. 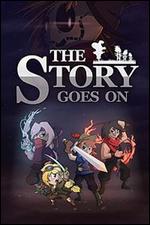