Tesla vs Lovecraft Pre-Order Now Available for Xbox One

Finnish game developer 10tons Ltd. has announced that their latest game, Tesla vs Lovecraft, will launch for Xbox One via ID@Xbox on March 16th. The game is priced $14.99 USD but you can pre-order the game as of now with a 20% discount.

Tesla vs Lovecraft is a twin stick top-down shooter where inventor Nikola Tesla squares off against horror author H.P. Lovecraft and his monster minions. With the Quantum Teleport backpack the player is able to teleport a short distance to any direction, even through walls and monsters. The player is also able to activate the Tesla-Mech battle robot, which grants an immense but short lived boost in firepower. A hefty arsenal of conventional and scifi weapons, powerups, special abilities, and selectable perks is also present. 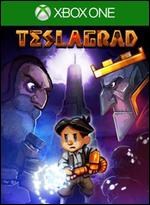