V-Rally 4 Announced for Xbox One

Bigben Interactive and developer Kylotonn Racing Games surprised everyone with the announcement of their collaboration on the return of the ultimate off-road simulation: V-Rally. Developed by Kylotonn Racing Games, a French studio specializing in racing simulations such as WRC 7 and TT Isle of Man, V-Rally 4 invites players to experience the extreme sensations of the most insane races.

Absent since 2003, the franchise is now making its comeback with more than 50 models of emblematic rallying and extreme motorsports vehicles. Nostalgic players can collect, upgrade, customize, and master the favorite cars.

V-Rally was first released in 1997 on PlayStation 1, with 3 game modes and a selection of real-world vehicles and famous tracks. Some years later, on PlayStation 2, V-Rally 3 released to huge success, adding a career mode with decisive team choices and an even greater number of tracks.

With V-Rally 4, the goal is to remain faithful to the identity of the franchise, which earned the support of millions of fans, and to strike a perfect balance between sensation, presentation, and simulation, while offering the best graphics and gameplay the latest technology can support.

You can check out the reveal trailer right below: 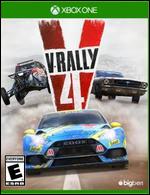