Rising Star Games is Bringing RICO to Xbox One

Video game publisher Rising Star Games have announced that they are publishing the arcade-paced, action-movie inspired, sensory onslaught that is RICO in Autumn of this year.

What the hell is RICO you ask? We wondered the same thing.

The game’s title stands for “Racketeer Influenced and Corrupt Organizations” Act, a United States federal law relating to criminal organizations. In the game you will kick down doors, shoot bad guys, and exploit the element of surprise to gain the upper hand against overwhelming odds, in this cooperative multiplayer first person shooter.

Want more? Ok. You will partner up with a friend in local couch co-op or online, to blast through an ever-changing series of procedurally generated levels. Come back every day for daily challenges and, as you play, unlock weapons, weapon customizations, and new “traits”– gameplay affecting rewards that modify, enhance and dramatically alter your characters’ abilities.

Check out the trailer below for a sneak peek at the game in action: 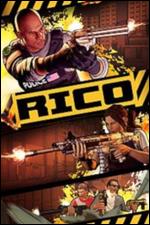