Gorogoa Coming to Xbox One Soon

Yes, you read our tagline right, the name is strange enough to catch our attention.  Gorogoa is a handcrafted puzzle game designed, developed and illustrated by Jason Roberts, and it’s coming to the Xbox One from publisher Annapurna Interactive.

So, what are you getting with this strangely named game? Well, we are glad you asked, as we have a few of the features listed below:

So, with that being said, know you know a bit about this strangely named puzzle game. 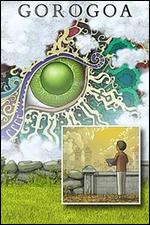