Racing game developer Milestone,, and Dorna Sports S.L, have announced that the MotoGP franchise is continuing with a new chapter, aptly titles MotoGP 18. It will be which will be released on June 7 and it will be released direct to digital only in the US.

Celebrating passion, excitement and all the adrenaline of the MotoGP championship, the MotoGP videogame is coming back with a completely rebuilt edition. MotoGP 18 is said to give players the opportunity to take part in the best motorcycle racing show on earth, featuring all the official content from 2018 MotoGP™ season and exclusive improved features which will set a completely new level of realism and immersion.

But wait, there is MORE (caps added for emphasis). Following last year’s success, Dorna Sports and Milestone are launching the next stage of the MotoGP eSport Championship, offering fans the opportunity to live MotoGP as a protagonist.

2017 witnessed MotoGP make an exciting move into the world of competitive gaming, setting a new standard in racing eSport involving top players from all over the world who fueled the show from the first online challenge to the Grand Final, as well as top riders and sport personalities. The world-first MotoGP™ eSport Championship was comprised of six online qualifying challenges, which led up to the exciting final showdown at the Gran Final in Valencia, broadcasted in more than 190 countries worldwide.

So there you have it, a new two wheeled road racer is right around the corner, and we hope to have more details soon. 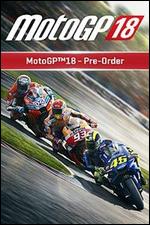