Hyper Sentinel Set to Release on May 11th

Those who are fans of both space shooters and/or retro games have something to look forward too next month. Huey Games has announced a release date for its arcade space shooter, Hyper Sentinel, available on Xbox One on May 11.

What is this retro game you ask? Well, Hyper Sentinel is a pure arcade flip and scroll shooter, shot through with classic gameplay in a state-of-the-art, modern game. It doesn’t just inspire nostalgia – it repackages what makes people nostalgic and adds a smart, modern feel to create the ultimate Neo Retro experience.

With simple controls, fast-paced action and intuitive gameplay, Hyper Sentinel is the ultimate pick-up-and-play experience that lets players jump into the role of a lone ship defending the earth from marauding aliens, adding no extra waffle than that.

Thos who happen to live in the UK will be excited to know that it will be available to play this week at EGX Rezzed 2018 at Tobacco Docks, London, on the Tentacle Collective stand. Three playable levels across the range of platforms will be available for players to get their itchy trigger fingers on before release.

Stay tuned as we keep our own eyes on the look out for more information as the release day gets near. 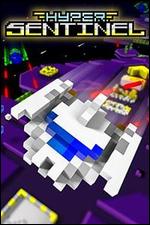